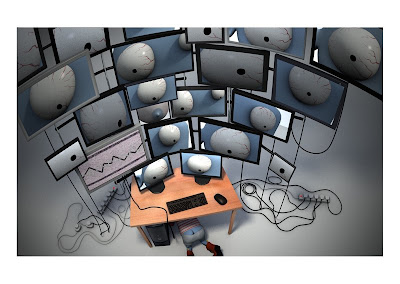 Simon Cornish is an independent animator, illustrator and scriptwriter who provides the Mental Roy character illustrations for a monthly column in 3D World magazine as well as writing other articles and reviews.
Originally starting with a chemistry degree where he worked under a Nobel Prize winning professor, he moved on to a motorcycle instructor business to fund his animation degree. Cornish produces work in a variety of fields including visual effects, 3D CGI and animation working for and having worked with a variety of companies including Future Publishing and related magazines, producing illustrations and writing articles for them as well as a variety of other projects he has worked on for different companies.
One particular reason I like his style is because of the simplistic, comical work he produces. In particular his Mental Roy character illustrations are very varied and in some cases of a mature nature that are very effective at conveying a message whilst maintaining the same style and character traits.